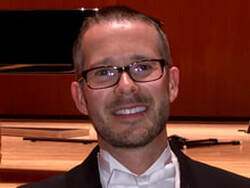 Brad Wallace was appointed director of bands at Parkway West High School in August of 2015.  Mr. Wallace's prior teaching experience includes ten years at Effingham (IL) High School and two years as a graduate teaching assistant at the University of Illinois at Urbana-Champaign.  While at Effingham, the band program grew from 60 to 130 members and consistently received state-wide recognition for excellence in the areas of concert band, jazz band, and marching band.  While at the University of Illinois, Mr. Wallace's responsibilities included instructing undergraduate courses in instrumental conducting and assisting with all five concert bands, basketball pep bands, and the Marching Illini.

Mr. Wallace holds a bachelors degree in music education from Eastern Illinois University (2003), a masters degree in wind band conducting from the University of Illinois at Urbana-Champaign (2015), and has completed additional graduate work at the VanderCook College of Music in Chicago, Illinois.  His teaching responsibilities at Parkway West High School include instructing the Marching Longhorns, the concert and symphonic bands, instrumental jazz, courses in music technology and guitar, and overall administration of the PWHS band program.  Mr. Wallace holds memberships in the National Band Association, the National Association for Music Education, the Illinois Music Educators Association, and the Missouri Music Educators Association.

Originally from Perryville, Missouri, Mr. Fischer received a bachelor of arts in music with a jazz studies minor from Truman State University. Mr. Fischer has also recently completed a Masters of Arts in Instrumental Conducting and a Master of Arts in Education from Truman State University. As a music student at Truman, Mr. Fischer has participated in the Wind Symphony I, Missouri All-Collegiate Band, Jazz Lab Band, Jazz Ensemble, Statesman Marching Band, and chamber music ensembles.  In 2011, Mr. Fischer was named the winner for the Missouri Music Teacher Association Young Artist competition in the woodwind division, as well as, a runner up in the Music Teacher National Association Chamber Music Competition state division with the Auftakt Four Saxophone Quartet. At Truman, Mr. Fischer worked with the Statesman Marching Band as a drum major and band staff member, Wind Symphonies, Concert Band, Amethyst Independent Winter Guard, and Jazz Lab Band. Mr. Fischer is an active member of Missouri Bandmasters Association, Phi Mu Alpha Sinfonia, Pi Kappa Lambda, and the National Association for Music Education. Mr. Fischer also coordinates music, drill, and show concepts for marching bands in Missouri and Iowa.
​
In the Parkway School District Mr. Fischer will be assisting with the bands, as well as,  teaching a few additional music courses at Parkway North & Parkway West High Schools.

​
Angelete Frein serves the Parkway West High School Marching Band as the assistant band director.  During the school day she teaches beginning band in the Wentzville (MO) school district.  Prior to her appointment with the Parkway School District she was the director of bands in the Bloomfield (MO) School District.

Ms. Frein received her bachelors degree in music education from the University of Missouri-Saint Louis (2015). While attending UMSL, she also volunteered with the Francis Howell Central Spartan Regiment, Elsberry Marching Indians, and worked with students at Oakville Middle School.

She is an advocate for music education.  She has advocated for music education with policy makers at the national, state and local levels.  She has performed in a variety of ensembles ranging from wind ensembles, jazz ensembles, chamber ensembles, and a solo performer on horn.   Ms. Frein holds membership with following professional organizations: the National Association for Music Education(NAfME), the Missouri Bandmasters Association(MBA), and the Missouri Music Educators Association(MMEA).
​
​afrein@parkwayschools.net

Mr. Skip Thompson currently serves as the Adjunct Instructor for World Percussion at the University of Missouri , where he directs the World Percussion Ensemble and MU Steel.  He has previously served as the Adjunct Professor of Percussion at Culver-Stockton College in Canton, Missouri. Mr. Thompson received his Bachelor's and Master's degree in percussion performance from MU and has also completed a year of study in the renown Northern Illinois University Steel Pan Program under the direction of pan virtuoso Liam Teague and master pan tuner and arranger Cliff Alexis.

​An active percussionist throughout Missouri, Mr. Thompson is a permanent member of the Banana Oil Pan Band, which travels extensively in Missouri, Illinois, and Kansas. He has also played with many local Columbia artists, including Nick and the Fireflies and Phylshawn Johnson. In the fine art realm, Mr. Thompson is a frequent percussionist with the Columbia Civic Orchestra and has also performed with the Ninth Street Philharmonic and the Columbia Handbell Ensemble. During his time at MU, Mr. Thompson was a member of the with the MU Concert Jazz Band, where he received two Outstanding Soloist awards at the Elmhurst Jazz Festival and with whom he debuted his big band composition "Refractions" on the MU Jazz Program's 2011 CD Tunnel Vision. Mr. Thompson is also featured along other MU graduates in a video recording of Emmanuel Sejourné's Martian's Tribes, which is currently featured on the Vic Firth Education website.
​
Mr. Thompson is also an accomplished educator. He runs Skip Thompson Studio, a private percussion studio formerly based out of Jefferson City. Mr. Thompson's students have consistently received top honors at MSHSAA State Solo and Ensemble contests as well as high placements in both All District and All State Bands. Skip Thompson Studio is now based out of the St. Louis area, where Mr. Thompson also teaches elementary music in the Ferguson-Florissant School District.  Mr. Thompson's primary instructors were Dr. Julia Gaines and Liam Teague.

​skipthompsonstudio@gmail.com
Stephen Hanrahan joined the UMSL Department of Music faculty in 2013.  Additionally, he currently is an active free-lance hornist in the St. Louis metropolitan area. He serves as Principal Horn of the Illinois Symphony Orchestra/Illinois Chamber Orchestra, as well as extra/substitute horn with the St. Louis Symphony Orchestra, having accompanied the SLSO on two tours of Carnegie Hall. He is also Second Horn with the Municipal Theatre Association of St. Louis (MUNY) and Hornist with the Fox Theater Orchestra.

Mr. Hanrahan is a former Adjunct Professor of Horn at Millikin University in Decatur, Illinois, and Southeast Missouri State University in Cape Girardeau, Missouri, and currently teaches privately throughout the St. Louis metro area. In addition to private instruction, he holds sectionals and masterclasses with many area schools. He received both his masters and bachelors degrees in Music from the University of Missouri, where his instructors included D. Bruce Heim and Laurence M. Lowe. He also attended Northwestern University where he studied with Dale Clevenger, Principal Horn of the Chicago Symphony Orchestra. He has received additional instruction from Roland Pandolfi, James Wehrman, and Tod Bowermaster of the St. Louis Symphony Orchestra.

Jessica Knopf earned her Master of Music degree from the University of Missouri, and her Bachelor of Music degree from Bowling Green State University where she studied with renowned contemporary saxophonist John Sampen.  She has performed in the United States and Europe as a concert soloist, as well as in saxophone quartets, saxophone ensembles, and bands.  In 2012, Jessica gave the world premiere performance of “The Soulful and the Perpetual” by Chen Yi at the World Saxophone Congress in St. Andrews, Scotland.  Her students have earned top ratings at both regional and state Solo and Ensemble festivals, and have auditioned into All-Suburban and All-State Bands.

Clara Richter has been teaching private flute lessons in the St. Louis metro area for more than 6 years.  She received her Bachelors in Music with a concentration in performance at Eastern Illinois University; and a Master of Music from Northwestern State University in Louisiana.  Prior to her return to the Midwest, Clara taught a large studio in Ft. Worth, Texas, where she also co-created a summer flute camp for middle- and high-school students, and for several years was co-chair of the Texas Flute Society Flute Festival, the second largest flute convention in the nation.  Here in the St. Louis area, Clara teaches private students from many different school districts, and is on the faculty of Webster Community Music School.  She is a member of the Flute Society of St. Louis, and plays in the Saint Louis Wind Symphony.

Cayte Brier began teaching the Parkway West Colorguard and Winterguard in the Spring of 2016. Cayte started her colorguard career performing with her high school Fall Colorguard and Winterguard programs. Cayte went on to march for two seasons with the Phantom Regiment Drum and Bugle Corps. While in college, Cayte taught colorguard as a camp instructor for two summers with Fred J. Miller, Inc.. and consulted for several High schools in Central Indiana. For the next ten years, Cayte was instructing and consulting at Lawrence Central High School in Indianapolis, Indiana winning several state titles as well as the Grand National Championship with Bands of America.

A St. Louis native, Gabe received her Bachelor of Music in Trombone Performance at the University of North Texas. She has studied trombone with Jan Kagarice, Vern Kagarice, Tony Baker, Steve Lange, and Donny Pinson. While at UNT, Gabe performed in many university ensembles, including Symphonic Band, Chamber Orchestra, Jazz Lab Bands, the Green Brigade Marching Band, and trombone choirs and quartets. She also marched baritone for three seasons (2002-2004) with Southwind Drum and Bugle Corps.

While in the North Texas area, Gabe performed with the Flower Mound Symphony Orchestra and Sherman Symphony Orchestra. Now living back in her hometown, Gabe is active in the St. Louis music scene, currently playing trombone with St. Louis funk band Hazard to Ya Booty. She has performed with many St. Louis ensembles, including the St. Louis Low Brass Collective, the Matt McCallie Jazz Orchestra, the University City Summer Band, and the St. Louis Wind Symphony, and has been heard in the pit orchestra for productions at Stray Dog Theatre, Gateway Center for Performing Arts, and Fr. William Scheid Players. She is also an active church musician, soloist, and chamber musician. Gabe began teaching low brass lessons in 2005 and works as a low brass clinician for local schools. For more information about Gabe, visit her website at www.gabemueller.com.